We haven't heard from CelebriGum's favorite made-up gasbag art critic, J. Arlen Parkwood, in quite a while.  I bet he'll like this photo.  J. Arlen? 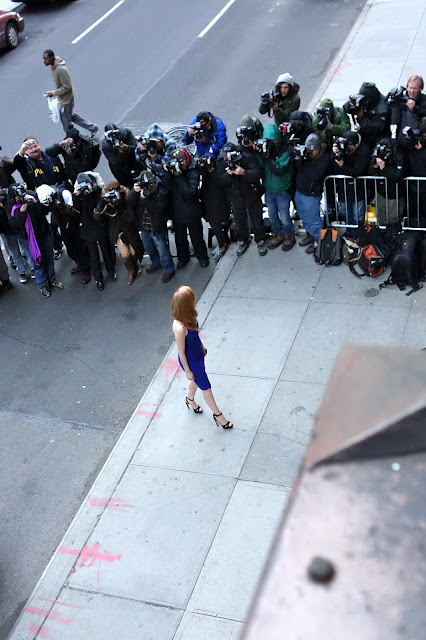 "Devastating.  The axis captured by the CelebriGum camera delineates a modern trinity: the bold-faced name behind the fortification of official enthrallment, balanced by the excluded "average Joe" and the piece of discarded gum -- equally inconsequential, in the eyes of our celebrity-mad culture.  Meanwhile, the opposing diagonals of the ledge and sidewalk suggest a subtle rebellion, a nascent nay-saying as yet unrealized except through the other-directed gaze of the actress -- but is she gazing as herself, or as one of her fictional constructs?   Are we seeing two roads diverge in a concrete jungle, with an invitation to take the one less traveled by?  But should we take that road if the movie star goes coatless in January, impervious to "Frost"?  What, if anything, will make all the difference?  If one poses enough rhetorical questions, will one eventually be able to stop writing?"

Thank you, J. Arlen.  You've given us a lot to pretend to think about.