Since CelebriGum launched in August 2010, people have asked "Who chewed the gum?"  "How long has the gum been there?"  "What kind of gum is it?"

I assumed the origin of the gum would always remain a mystery.  But I was wrong.  Here's the story that can now be told. 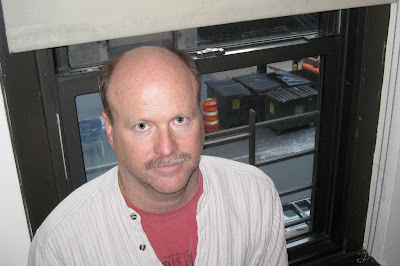 Production Coordinator Mike McIntee writes The Wahoo Gazette, the daily Late Show summary and commentary.  Shortly after the CelebriGum Gallery Show and holiday party, I noticed this remark in the Wahoo Gazette:

You may ask, “How did that gum get there?”  I know the story, but I’ll leave that to Steve to tell, if he wishes."

Of course I had to pursue that lead -- the first lead I'd ever had.

Mike told me that at the gallery show party, champagne had loosened some tongues.  He gave me the names of The Chewer and The Witness. 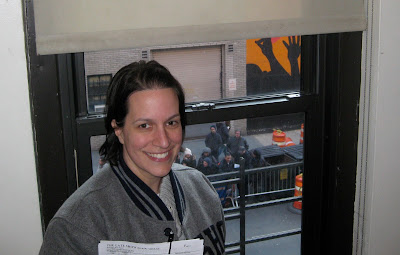 Like Mike and myself, Writers' Segment Producer Amy Deiboldt spends a lot of time in the hallway by Dave's dressing room in the afternoon.

Some years ago, Amy saw something about to happen and intervened, little realizing that her role in The Incident would one day change gum-based comedy forever.

Amy: "Once I heard you were taking pictures with the gum in the foreground, I realized the same gum was still clinging onto the sill.  I was not sure if (MYSTERY CHEWER) had told you it was originally her gum, so I kept quiet out of respect for her."

That's right, the Mystery Chewer is a woman.  Here she is. 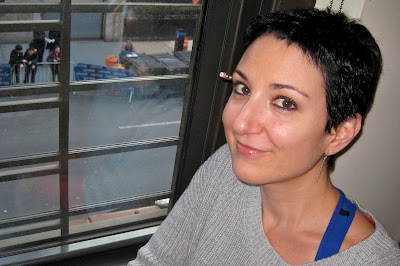 This is Production Associate Sarah Eyde.  In her own words:


"I think it happened about 3-5 years ago.  I was chewing green Trident, I think.  It was springtime; the window was open on the 2nd floor outside Dave’s dressing room, and I was standing next to Amy Deiboldt with my hand out the window preparing to drop my gum when she yelled, “Don’t do that… It will land on someone’s head!”  Of course she was right, and I felt like a jerk for not thinking of that, so I ended up placing it on the ledge with the thought, “This will just disappear.”  I want the record to reflect that I don’t walk around sticking my gum on things!  Anyway, it didn’t really occur to me that it might possibly be mine until last summer, and it was a "I wonder if that’s the gum I placed on the window when Amy kindly reprimanded me for attempting to drop it to the ground?” thought."

"There are a couple reasons I kept this to myself: 1. who really cares why the gum is there, and 2. I didn't want to be the ill-mannered, lazy employee who couldn't throw her gum in a trash can.  Then at the party I had two glasses of champagne and told Mike McIntee... Yes, I am surprised it's still there... I thought Mother Nature would have had her way with it."

Sarah adds that she's not 100% sure the gum is hers, but it seems to me like the case is closed.

I'd like to point out that there's no trash can in that hall.  So Sarah didn't have a lot of options at the time of The Incident.

The gum's been stuck to the ledge for at least three years and maybe five.  (And Amy thought it could have even been as long as six years.)  So we could be looking at a very long-term project here.

Sarah says "who really cares why the gum is there."  Maybe she's right.  But after all this time, with so many people wondering, I couldn't not tell the story.  And look at you, still reading.

Sarah, thank you for being a good sport.  As Celebrity Zero, you get the full treatment. 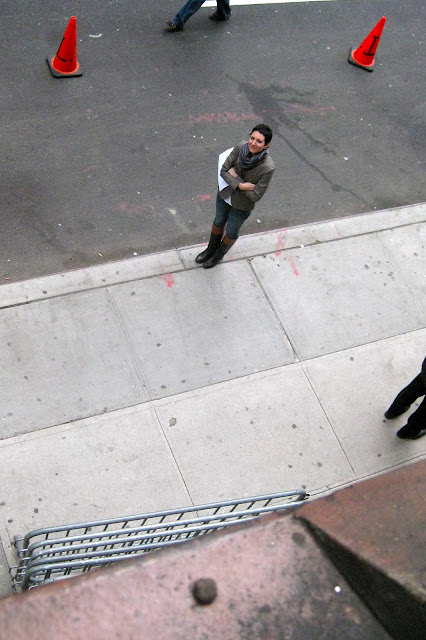 The gum's future is unknown, but at least now we understand its past.  Now we can all get on with our lives.