Congratulations to Julianna on the Emmy win!


And now, CelebriGum welcomes back its favorite fictional gasbag art critic, J. Arlen Parkwood, to give his high-falutin' review of the Julianna Margulies photo: 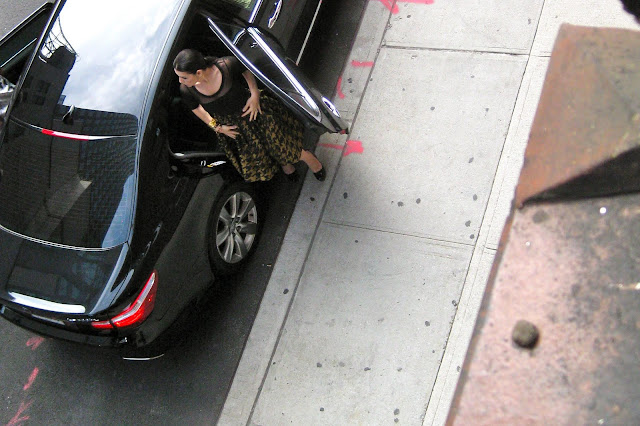 "A CelebriGum photo particularly rich in visual symbolism, echoed themes, and evocative contradictions.  First, we're invited to consider the gum itself, elevated to prominence above the mundane gum spots on the sidewalk--a subtle commentary on our society's celebrity culture.
Notice how the pattern in Ms. Margulies' skirt is echoed in the texture of the reflected skyscraper, and the red of the taillights is picked up by the red of the painted markings on the sidewalk.  The red arrow brusquely instructs Julianna how to proceed with her carefully regimented celebrity life, yet she gazes curiously in the other direction.  And just as the gum (bubblegum?) is alone on its ledge, she too is alone in her bubble of fame.
We look down to the street, but thanks to the car's reflective surface, we simultaneously look up into the sky, a reminder of CelebriGum's paradoxical combination of high and low culture -- "
KA-BOOM!
Wow.  He literally was a gasbag.  The poor bastard just exploded like the Hindenburg.
Oh, the pretentious humanity.
I have to go get a mop.  Hope you liked the picture of Julianna Margulies with old gum.
Posted by Steve Young at 6:57 PM