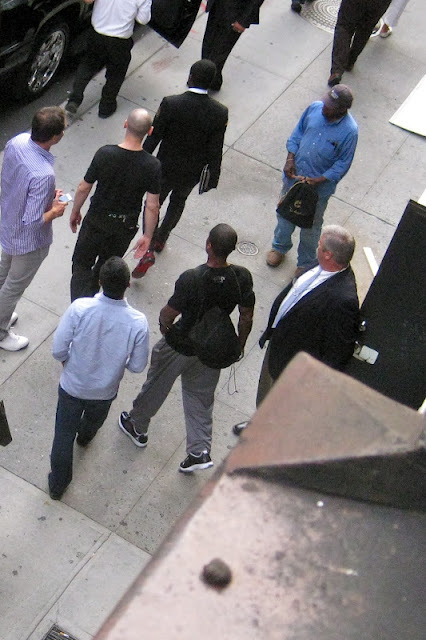 Here we see will.i.am, accompanied by assistants will.he.is, will.you.are, and la?rr?y, leaving the Late Show in a troubled mood.

Shortly before his performance, he realized his second period was missing, and he had to go on with an emergency comma in its place.  (The gum was offered but declined.)  Though the song was well-received, he didn't feel he did his best work as will.i,am.

Happily, the missing punctuation was located a short time later.  It was in the Lost & Found Box at the nearby e.e. cummings museum, which the entourage had visited earlier in the day.

"I remember bumping into la?rr?y in one of the galleries.  That must have been when it popped out," said a relieved will.i.am.  "There are so many examples of random punctuation and odd grammar there that I didn't even notice the stray period rolling across the floor."

Crisis resolved, will.i.am celebrated by visiting the museum gift shop and buying everyone in sight an expensive semi-colon.